As part of this ANAT Synapse art/science residency with CMBD, and another art project (TBA), I have been examining the concept of a hybrid seaweed/mammalian biopolymer material.

This fits with my longstanding interest in the Chimera as hybrid entity.

After self-directed research, I added wax to polymers to further water resistance.

Initial drying showed marked shrinkage and cracking, however the material rehydrated well without excess swelling as with other polymer formulae.

I tweaked the formula and solved the cracking problem.

Below: Polymer before and after soaking in water, some swelling (less than regular polymer) and film remained strong.

As well as a film, I made simple hollow forms (vessels) to further test this bioplastic for water holding ability.

To reduce shrinkage, I experimented with polymer ratio to make denser films. 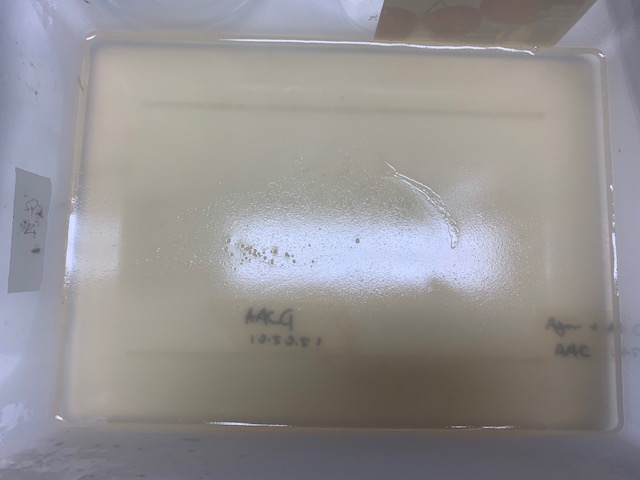 In another direction this week with biocompatible polymers:

For optimal cross linking of bioplastic and biopolymer. Peng Su and I tested earlier formulations for pH.

To increase bio-compatibility (bio-compatible polymers can be used for bodily regeneration therapies e.g. cell culture), and breathability (for diverse use), the polymer was shocked using a variety of freezing methods.

“Plastics memento Mori”, is a series of images which evoke the horror of the plastics problem and are a reminder of the inevitability of mortality. Memento mori works suggest that we take responsibility for our actions. Incorrect actions invariably lead to our demise. These images are grave, as critical issues demand serious responses.

Plastic fantastic? It’s interesting that good intentions can go awry. We may speculate about the future applications of novel technologies however they often have unforeseen implications. This ideology goes back to ancient times and is evidenced in Promethian myth. Fossil fuel plastics have saved lives. They were developed to alleviate pressure upon organic resources under threat due to high demand; whale products, tortoise shell, ivory, bone, sea shells, fur, leather and plant matter. In comparison to natural products, plastics are cheap, broadly available in a wide range of consumer products and are therefore economically democratic. Plastics, used extensively in the medical sciences continue to save lives. It must be appreciated that the benefits also come at a cost. Humans have not behaved responsibly with regard to plastic waste. We have tended to ship our waste off shore, making plastics an ‘out of sight out of mind’ situation. With a life span beyond producer’s and consumer’s needs, plastics have become a serious threat for all life on earth. Beyond obvious impact upon wildlife and environments that have ingested or become suffocated in its mass, plastics break down into almost invisible microplastics that are now ubiquitous and are believed to disrupt the health of all living organism. In order to heighten feelings of empathy I have put myself into the picture, replacing the animal as victim, as unfortunately humans often have a hierarchical view of the world, placing themselves above other lives. This anthropocentric viewpoint is futile as wellbeing is interdependent with a complex and healthy biosphere. As part of the ANAT Synapse residency at the Centre for Marine Bioproduct Development (CMBD) we are working with marine macro algae to produce biodegradable bioplastics to investigate more hopeful narratives and try to do better for humans, animals, plants and the environment.

Daly N, For Animals, Plastic Is Turning the Ocean Into a Minefield, June 2018 https://www.nationalgeographic.com/magazine/2018/06/plastic-planet-animals-wildlife-impact-waste-pollution/

TATE Art Term – Memento Mori, https://www.tate.org.uk/art/art-terms/m/memento-mori “Memento mori is a Latin phrase meaning ‘remember you must die’…A memento mori is an artwork designed to remind the viewer of their mortality and of the shortness and fragility of human life.…Closely related to the memento mori picture is the vanitas still life. In addition to the symbols of mortality these may include other symbols such as musical instruments, wine and books to remind us explicitly of the vanity (in the sense of worthlessness) of worldly pleasures and goods. The term originally comes from the opening lines of the Book of Ecclesiastes in the Bible: ‘Vanity of vanities, saith the Preacher, vanity of vanities, all is vanity.’ The vanitas and memento mori picture became popular in the seventeenth century, in a religious age when almost everyone believed that life on earth was merely a preparation for an afterlife. However, modern artists have continued to explore this genre.”

We have been manipulating/testing the polymers in order to understand and ‘catalogue’ their properties.

Biodegradability: In order to do better, biodegradability is of utmost importance. The polymers I laminated some weeks ago are tested in the various types of waters the CMBD team and I collected during the field trip last week. We see at the 1 hour test (above) that the fresh water sample (FW) collected from Goolwa is the best environment for polymer degradation. This is possibly due to 1) osmosis or 2) more bacteria in the freshwater sample. At this short time frame option 1) is more plausible. Testing for biodegradability will  take place in further temporalities. (Note that the circle craft cutter has come in handy for preparing sample uniformity, thus making changes visible against a standard)

Tensile strength: Along with biodegradability is the need to serve purpose. Polymers were tested by Flinders University research team for strength under stretch test.

Copier printing: Polymer was run through the copier. Jet printing inks failed to adhere to the polymer surface resulting in powdery image. I will be doing more work in this area.

Dye: A bleached biomass has separated from the supernatant which has retained dye.

Water proofing: We have been devising different types of experiments to improve water resistance and to reduce polymer leakage. These includes adding waterproofing additives and improving physical properties.

As mentioned in earlier posts, most plastic waste ends up either in landfill or in our waterways. It is important to ‘make visible’ that our marine algal based bioplastics and biopolymers are biodegradable. If they return to the sea, our desire is that they do not add to the plastic waste problem.

Together with CMBD staff member Peng Su and visiting scholar Wanling Cai, I went on a field trip to collect water samples from the South Australian coastline. A variety of locations were selected to include various waters; brackish, mangrove, shallow beach and open sea. We travelled over 400km as all samples were collected on the same day.  The waters will be used to test/prove the biodegradability of seaweed derived plastic polymers.