French literary theorist Roland Barthes explained  in his text “Death of the Author”, that it is not literary convention alone, nor solely the writer that brings meaning to a text but further interpretation comes from those who subsequently read it. From my experience, similar can be said of working with a medium, product or technology. It may be designed for a certain use, however it is the alternative applications that people creatively apply to it that I find fascinating. These uses can be defined as hacking.

There is often a lag between the development of a new product or technology and the understanding of its full potential or risk. These good or bad consequences have been observed since ancient times and explained through such things as Pandora’s Box and Promethean myth. We simply have to look at plastics to observe this in action.

Further, together with CMBD, we have found that certain seaweed polymers can have multiple potentials e.g. from gel, to fibre, to film, to matrix, and can have broad applications.

One of the attributes of seaweeds is that certain varieties contain tannins. CMBD are interested in seaweed tannins for their health benefits. Tannins are bio-molecules that bind to proteins. They are also available in tea and wine. Tannins protect against oxidative stress; an imbalance in the cell’s ability to repair itself. (Free radicals steal electrons from molecules and make them unstable.)Tannins have antioxidant potential, protecting against oxidation as they can donate electrons to free radicals to make them more stable.

After observing the staining capacity of the seaweed tannins when pressing and drying samples between paper, I decided to experiment with the seaweeds we use to make polymers to make fabric dyes. Fabric dying processes were researched and I found that certain chemicals we use to precipitate the bioplastic polymers are also used to create fabric dyes.

Natural fabric dyes are said to be more ecologically friendly than synthetic dyes. 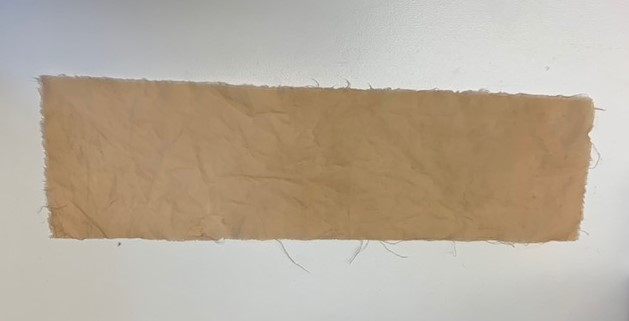 To date I have produced a subtle skin toned dye from the species Ecklonia Radiata but have had more of a challenge working with Durvillaea. 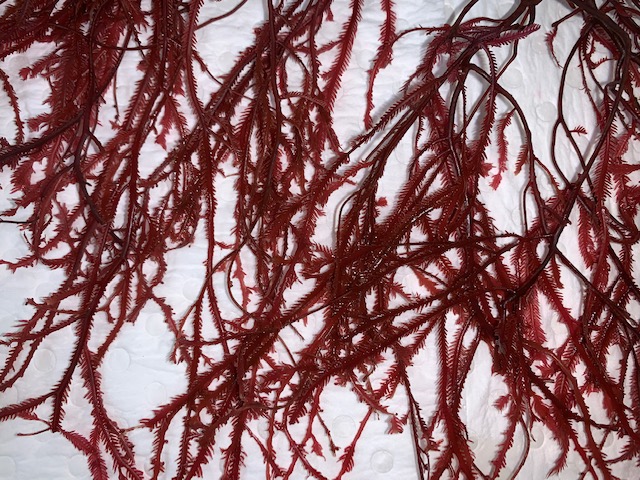 Beyond a purely economic focus, I wish to explore oceanic taxonomies that include broader cultural narratives.

What are the Blue Humanities?

Configurations dedicated a special issue on Science Studies in the Blue Humanities and identified the Blue Humanities as an emerging field pertaining to cultural meaning of the Ocean through physical, social, ideological, scientific and aesthetic modalities. It was identified that the ocean is storied through a network of knowledge systems; science and technology, fiction, society, economics and politics.

Authors put forward the idea that it is important to, “think the blue humanities and the discoveries of marine sciences through one another in creative ways.”p443 and that we consider, “The Physical convergences of water, [and] body..,[to] generate an emotional and experiential convergence.p438

The ocean was imagined as;

“to glimpse the seas one must…be immersed in highly mediated environments that suggest the entanglements of knowledge, science, economics, and power” Stacy Alaimo

This post is regarding Fyki seaweed biopolymer sculpture, named after the Greek word for seaweed. As the artefact has precipitated much interest and many questions since it was made early in the Green Plastics-Blue Ocean project, I will address the concepts associated with its creation.

My intention was to develop an intimate understanding of the properties of the polymer through intensive manipulation. The substructure of the sculpture is a  glass model of a head that I have used many times in my art practice. It is a generic form, pertaining neither to a particular gender or ethnicity. I wanted to test if the polymer could form a skin which would hold together over the 3D glass form. Glass and polymer are not compatible and it was clear that any attempt to simply pour the polymer over the head in quantities available in the lab would not result in a suitable ‘skin’ formation.

I drew upon prior experience from sculpture workshop i.e. lost wax casting method and developed a layering technique, that after several attempts to cover the form with unrefined brown seaweed (Durvillea Pototorum) polymer, finally resulted in minute polymer aggregates. These aggregates were very delicate and could easily be dislodged through subsequent polymer layers and the tendency for polymer swelling.

As well as being an aesthetic object which invites tactile response, Fyki  clearly demonstrates the attributes of the polymer beyond the 2D pour and cast method usually adopted in laboratory practice.

Further to this, the human form evokes the potential of bioplastic polymers for personal, regenerative, and other medical use.

Biodegradability is the natural process that occurs when a product breaks down. Compostability requires a certain setting which facilitates the breaking down.

Today CMBD members and I visited Peats Soil and Garden Supplies composting facility in South Australia. Peter Wadewitz, the Managing Director, showed great interest toward seaweed bioplastic materials, as  products that are both biodegradable and compostable.

Peter Wadewitz informed us about the Australian Package Covenant Organization (APCO). In mid-2018 at the Meeting of Environment Ministers (MEM) forum, the state and federal governments agreed to four Australian National Packaging Targets with the aim to reduce our waste problem by the year 2025.

The 2025 Australian National Packaging targets together with the recent Chinese ban on receiving the world’s plastic waste have situated our work with biodegradable plastic within a massive opportunity to bring about real changes in thinking and actions relating to the plastics problem. Biological action within a properly composting ‘BiobiN’ can generate temperatures around 60-70 degrees celsius, effectively killing waste contaminated with viruses. Technology such as this creates opportunity for safe disposal of medical waste including models/products we have been working on e.g. surgical masks.  Specifically pertinent, it seems, during the current situation in which more medical waste will be generated due to laws in Australia requiring people in lockdown or high risk areas wear facial masks whenever they leave home. “Plague doctor” masks were stuffed with fragrant herbs to protect the wearer from disease. CMBD researchers are now working toward the production of surgical masks made from seaweed bio-polymer films. As mentioned in earlier posts, seaweed have antiviral properties making them both biodegradable and excellent for health and personal protection applications.  From the samples made last week, we are looking for seaweed biopolymer films with an open pore structure allowing for breathability. Of the many samples observed under SEM together with CMBD researcher Wanling, the sample above was amongst the films with suitable pore size. 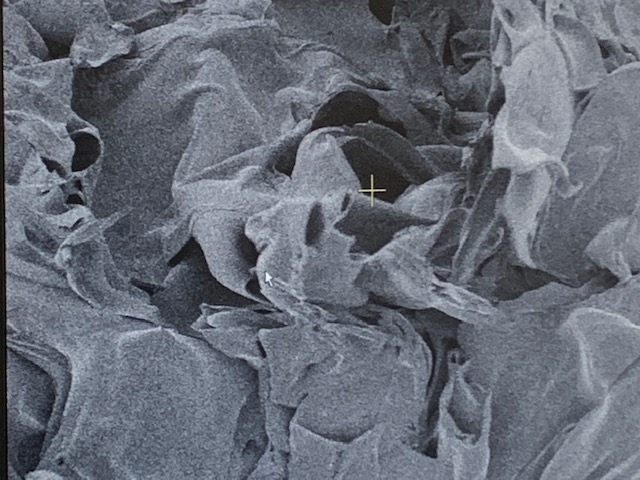 Most of the polymer films had no open pores making them suitable for other applications but rendering them unsuitable for surgical mask production.

Above: Samples are attached to SEM pinholder with double-sided carbon adhesive tape. They are then coated with a thin layer of gold before imaging to intensify electrical conductivity.

This idea was met with a variety of responses from laboratory staff.  They were invited to perform a sensory test by rubbing the polymer between their palms. CMBD Staff member Kirsten Heimann forwarded a paper on an additional anti-viral as a suggested additive to the gel. The anti-viral is a protein that binds to sugars attached to HIV, it envelopes the protein and prevents it from binding to mucosal cell surfaces. It is also active against herpes viruses. 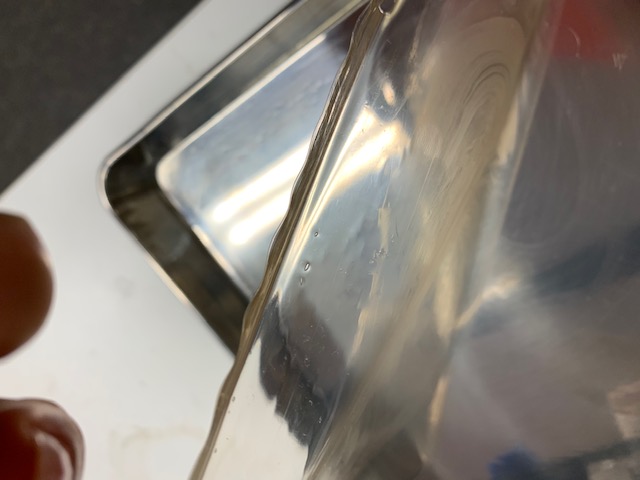 In addition to the societal relationship we have to plastics, another motive for collaborating with CMBD was to help with research and design of biodegradable marine algal polymers. Traditional techniques from the ‘plastic arts’ are useful. I demonstrated the making of an easy release, two piece mould to my collaborators for the creation of 3D bio-polymer scaffolds. 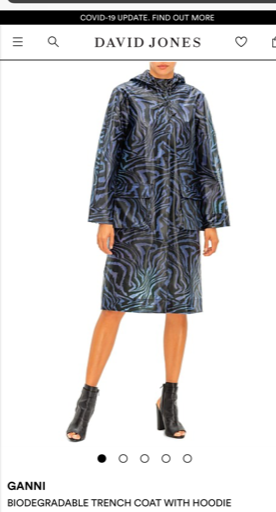 Novel product design depends upon cultural shift for it to be accepted. It was encouraging to see the inclusion of a biodegradable plastic garment in the online catalogue of an iconic Australian Department Store. Although the technology modelled above is not marine based as with this project, the focus upon biodegradability as a selling point within the fashion industry hopefully indicates a trend toward responsible behaviour and future demand for biodegradable plastics within the mainstream.

Within material and cultural studies, it is important that an artefact reflects the zeitgeist in which it is produced. Note here the underlying themes of anthropocentric crisis; consumption, responsibility and Covid 19.